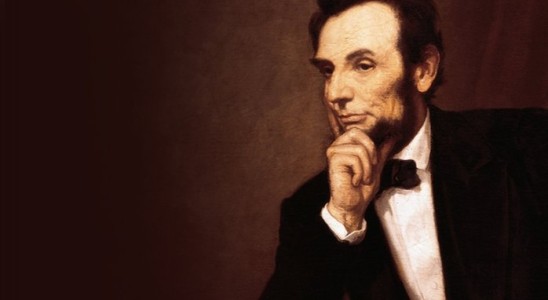 The Thanksgiving Holiday in the United States was passed into law by President Lincoln in 1863 so now is as good a time as any to reflect on our 16th president. I recently read a couple of books on Abraham Lincoln—Founder’s Son by Richard Brookhiser and A. Lincoln by Ronald White.

Lincoln was one of the most unlikely people ever to become president. He had no management experience, attended no more than one year of schooling, and managed his paperwork by stuffing important papers in his tall hat.

It occurred to me, however, that Lincoln possessed an overabundance of qualities that all great salespeople have: ambition, empathy and people skills. No doubt, he would have been an excellent candidate today for an entry-level sales position! And certainly, because of his leadership skills, he would have moved up into sales management.

So that begs the question: what kind of sales manager would Abe Lincoln be? You be the judge…

Lincoln understood the importance of listening and deep thinking.

As a boy, when his parents had house guests, Abe would remain silent, attentive – an observer of the conversation. He would never speak until the guests were gone. Then he would write down what he learned, and repeat it to himself again and again until he fully understood it.

Analysis was another of Lincoln’s strengths. Long before he had presidential aspirations he was a country lawyer. And it was said that Lincoln’s strength was his ability to focus on the case, mastering the details and the principles involved. “He not only went to the root of the question,” said his law partner, “but dug up the root.”

Lincoln was a great coach. He drew on his knowledge and skills, then asked insightful questions to help people discover their own answers.

During the first few years of the Civil War, Lincoln’s generals were mostly unsuccessful. He followed his generals’ decisions and actions very carefully and communicated with them frequently. But he took care to express his ideas and suggestions as advice posed through questions, rather than direct “do-this, don’t do that” orders.

Lincoln supported his peak performers even if they happened to ruffle some feathers in the organization.

Lincoln’s most successful general was Ulysses S. Grant. As Grant won victory after victory, his popularity rose. And sometimes that popularity was seen as a threat by others. One day a delegation of congressmen went to the White House to urge Lincoln that Grant be fired because he reportedly drank too much. Lincoln then told the congressmen that it would be helpful if they could tell him what kind of whiskey Grant preferred because he’d like to buy some for his other generals!

Lincoln took time to understand what his customers were thinking.

In the 1860s anyone could make a cold call on the White House and stand a better-than-even chance of getting in to see the President. Lincoln regularly took time to meet people who stopped by the White House without appointments to say hello. Why? Because he wanted to meet with common everyday citizens in order to better understand what his customer – the American people – were thinking. There were no pollsters in the 19th century.

Lincoln maintained his sense of humor, even during times of stress.

The morning after Lincoln was first elected to the presidency, just as the country was about to split apart, he greeted some newspaper reporters who had been following him during the campaign. “Well, boys, your troubles are over now. Mine have just begun.”

After the Union forces won at Gettysburg in 1863, Lincoln’s commander George Meade had not pursued the surviving Confederates, who retreated to Virginia. So the battle, though a major turning point in the Union’s favor, was not final as Lincoln had hoped it would be. Lincoln was distraught. He wrote a blistering letter to General Meade criticizing him for the missed opportunity. Following Lincoln’s assassination in 1865 the letter to Meade was found in Lincoln’s desk, never signed nor sent. Lincoln managed his emotions and knew that getting angry could not change what had already happened.

Perhaps the single most important attribute that Lincoln possessed was his ability to learn. He was passionate about self-improvement. As a boy he was greatly inspired when he read the biography of George Washington. And he didn’t stop learning when he moved into the White House. During the first few years of the Civil War, from 1861-May 1863, the Union army lost most of the battles it fought. Frustrated by this lack of success, Lincoln borrowed a book from the Library of Congress entitled “Elements of Military Art and Science” and studied it deeply.

Lincoln went to work every day with the attitude of a learner, and the result was that he continued to improve his leadership skills. The times demanded that he be good, and he made himself great.

So what kind of sales manager would Abraham Lincoln be, if he were alive today? No doubt, he would be a great sales manager! Fortunately for us, he had a different calling.

During this season of Thanksgiving, perhaps we could best say “Thanks, Abe” by striving to imitate his leadership qualities.