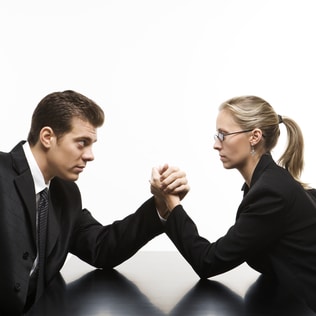 One of the most difficult situations sales managers face is how to confront problem performers in a way that gets them to change their ways, and become more successful. I define a problem performer as anyone who has not responded to your coaching conversations. In other words, you noticed poor performance or unsatisfactory behavior, brought the issue to the attention of the person, and gave them specific and actionable advice on how to correct the situation. Then, they made no change. Here’s what you do now….

The moment you notice a salesperson has failed to address a problem that you’ve previously talked with them about, setup a time to talk with them again. Don’t delay this conversation! Why? Because the sooner you address the problem the less negative emotion will be involved in fixing it.

If you let the issue go, and fail to deal with it in a timely manner, then your problem performer may assume their poor performance is acceptable to you. That only creates more negativity when you do finally get around to facing the issue. By addressing it in a timely manner, you stop the behavior before it becomes a bad habit. And, you are sending a clear message that you are unwilling to tolerate their continued problem performance.

Whatever the problem is that you are encountering with the rep, think through what YOU want to say for each part of the discussion. You’ve talked about this issue with the salesperson before, so you should be able to anticipate their responses to some extent.

Before you have this conversation you must know the answer to this question: “What will be the consequences to this salesperson if they, again, make no change after this next conversation?”

Don’t criticize the person because it can polarize the situation and cause more friction. Many salespeople are hypersensitive to personal criticism.

Instead, frame the conversation around their behavior(s) – what you would like and/or need to see them do differently in the future. Be sure to discuss how their performance problem is not consistent with your company standards and how it is negatively impacting their personal income.

Talk about the behavior you need to see going forward and lay out clear steps on how that behavior and/or result can be achieved.

Salespeople have the “gift of gab,” and many will use their verbal skills to sidestep uncomfortable situations. Your mindset here should be “Actions speak louder than words.” Make sure you don’t allow the conversation to be diverted.

Stick to your talking points.

If the person attempts to divert the conversation, bring them back to the unacceptable behavior and/or poor result.

The rep cannot change the past, they can only change the future. So don’t rehash grounds you’ve gone over multiple times already with the rep.

Keep the discussion focused on what needs to change going forward. When bringing up an issue remember to frame it in the correct way. Instead of saying “Why aren’t you doing XYZ?” (accusing the rep),  frame it in a nicer way like “I noticed you haven’t made the changes we discussed last week. Is there something more I can help you with there?”

7. Put the shoe on their foot

This technique works best when your problem performer is one of your senior-tenured reps who now has become a performance problem for you. Consider saying to them, “Put yourself in my shoes. Suppose you had a rep who was doing what you’re doing. As the manager, what would YOU do to resolve the situation?”

This is a very powerful technique of gaining agreement with your problem-performer that this is an issue that cannot and will not be ignored by management. Once they self-identify with the issue, it’s up to them to fix it and for you to assist in any way possible.

Besides following these tips, be sure to follow up with the rep the day after you have the conversation. Ask if they have any questions about what you discussed, and if they have feedback for you.

Remember, you can’t control the outcome of this conversation. It’s the rep’s choice to change. But you will have succeeded if the rep clearly understands the choices in front of them. The benefits of change, and the consequence that will occur if they make no change.

Then, if they do change, be sure to praise their progress. If they don’t change, well, it just may be time for you to talk to your HR department and begin initiating the steps towards “de-hiring” this problem performer.

If and when it to comes to terminating a problem performer, just do it. You don’t want your successful team members thinking….. “What took you so long?” Because successful people are demotivated when they have to work with people who are not contributing to the team’s mission.